Dutch Harbor (also known as Unalaska) has long been on my list of places to visit. Last summer we had considered a summer trip to Dutch and Umnak (the island just past Dutch) but decided to wait till we had someone else to fly down with. Despite our enthusiasm to explore this area of Alaska, we were less than excited when we found out that LifeMed would be starting a temporary base in Dutch for the cod & pollock season known as the A season. Maybe it was the fact that Woodsen wasn’t given the option to go or stay, or maybe it was that the A season stretched through my delivery date, either way, we weren’t happy about this new development. Fortunately, his co-workers were understanding and he was able to work a few extra weeks in the beginning of the season so that he would be home in March when Atlee was due to make her arrival (except we didn’t know it would be a girl at this point, or that her name would be Atlee) 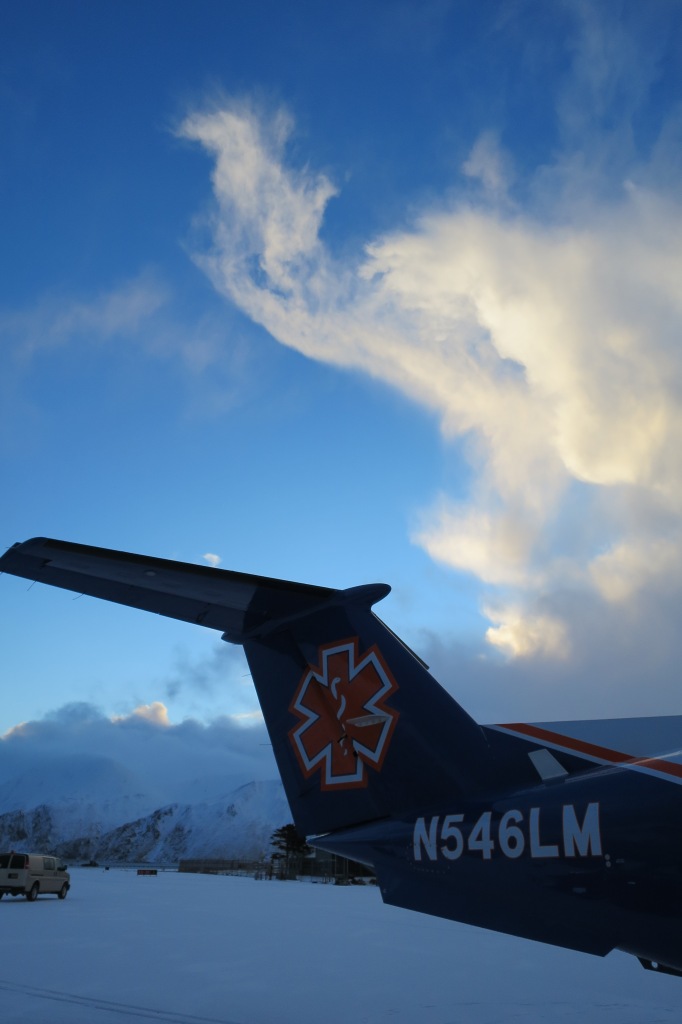 Despite the less than desirable circumstances, Woodsen returned from his first rotation in Dutch optimistic about the possibilities in Dutch. He told me all about the new rec center complete with a pool (with a slide) and racquetball courts, the potential for backcountry skiing, paragliding off of Ballyhoo, amazing seafood and sushi, not to mention the beauty of the Aleutians on a good day.

But that was the problem, I wanted to visit and make the most of having a place to stay in dutch, but  the chances of getting a short window of good weather and getting stuck due to bad weather seems about equal in my mind.  I decided to go for it and booked my ticket on Alaska Air. I used 7,500 Alaska Airline miles each way and didn’t pay a penny. My kind of price.

On Woodsen’s next rotation we landed after a 3-hour flight and noticed the LifeMed plane sitting on the tarmac. Sure enough, Woodsen had a flight waiting for him, so after a short 30 minutes in Dutch he was back in the plane flying two patients back to Anchorage. I got to stay and enjoy the sunshine and do a little of exploring.

You don’t have to hike to find a beautiful view in Dutch Harbor, even landing at the airport is scenic. The approach takes you between two islands and the runway is nestled near the base of Ballyhoo mountain with water on three sides.

Looking out from the airport parking this was one of the views.

After enjoying the view from the airport I went on a walk towards what I thought should be town.  In my short walk I experienced the dynamic weather that Dutch Habor and the Aleutians are known for. One minute it would be blowing huge wet snowflakes and I could barely see where I was going and the next minute it would be sunny and the clouds that had been pelting me with snow could be seen moving through the sky and dumping snow on another island in the distance.

Pill box’s left over from World War II were scattered along the road on the way to the grocery store.

The next day Woodsen had arranged for me to go on a flight with a friend who worked at Grant Air and was scheduled to fly the King Air to Nikolski on Umnak Island. We awoke to another great day of weather in the Aleutians and as usual, I took too many photos, so instead of making this blog extra long I’ll eventually get around to making another post about that trip. It was spectacular, to say the least 🙂

After my flight, we headed out on a tour around town guided by one of the managers in the clinic; unfortunately, it was cut short with another call for a medevac flight. Woodsen and the crew headed for the airport and I headed to Bunker Hill, a hike that had been suggested on our abbreviated city tour.

I wouldn’t consider Bunker Hill a hike, more like a nice stroll up a wide gravel trail to the top of the hill, but the vantage point you get at the top is stellar!

The road to bunker hill passes the boat harbor and I had seen a man in the hardware shop wearing a Northwestern shirt so I decided to scope it out, hoping to see the boat made famous by Deadliest Catch. 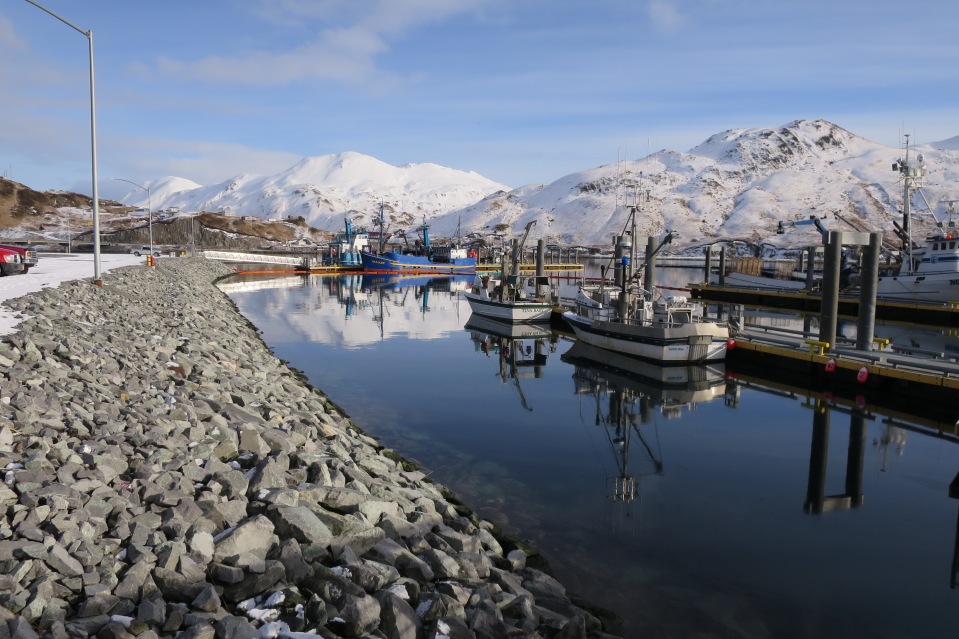 On top of Bunker Hill.

This pano shot has Ballyhoo in the center with the grocery store on the section of land nearest ballyhoo and the road to the rec center and clinic veers to the right and crosses a bridge.

A little under 2 months to go. I like to call this photo Bellyhoo. 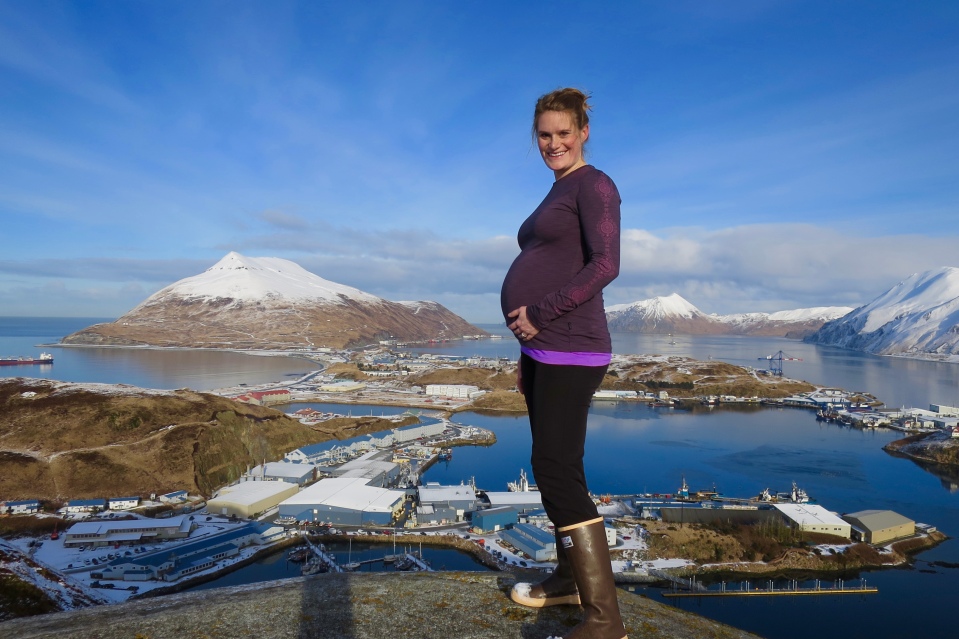 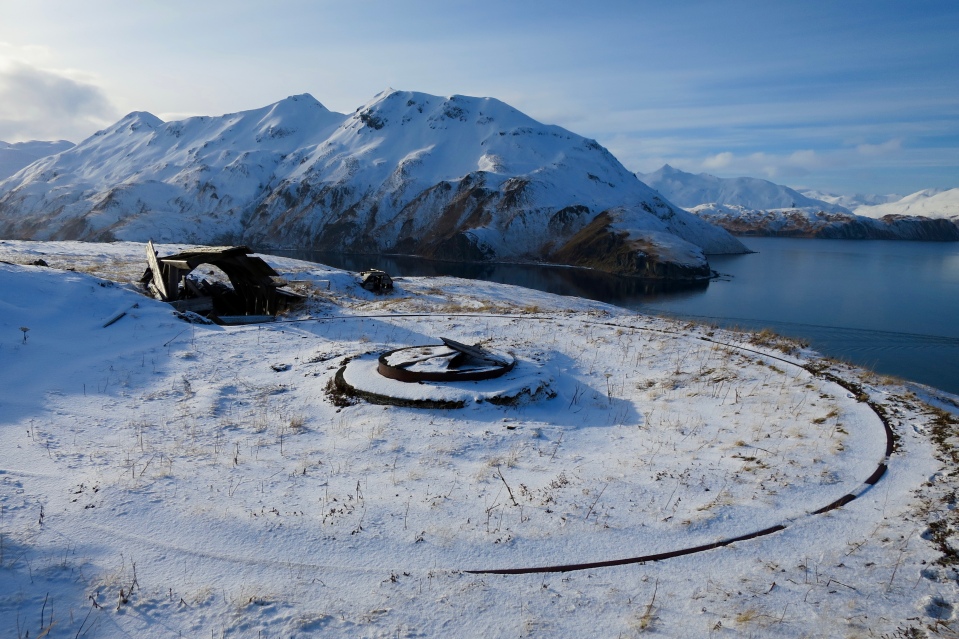 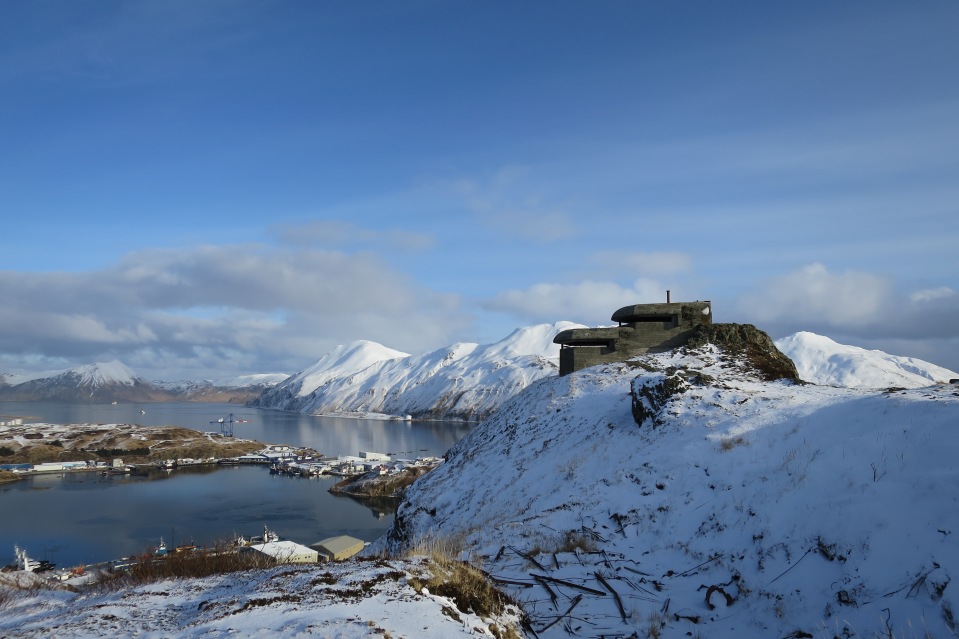 Not going to lie, I’m pretty proud of this shot. I used my camera’s timer and a couple rounds of jumping to capture this gem. 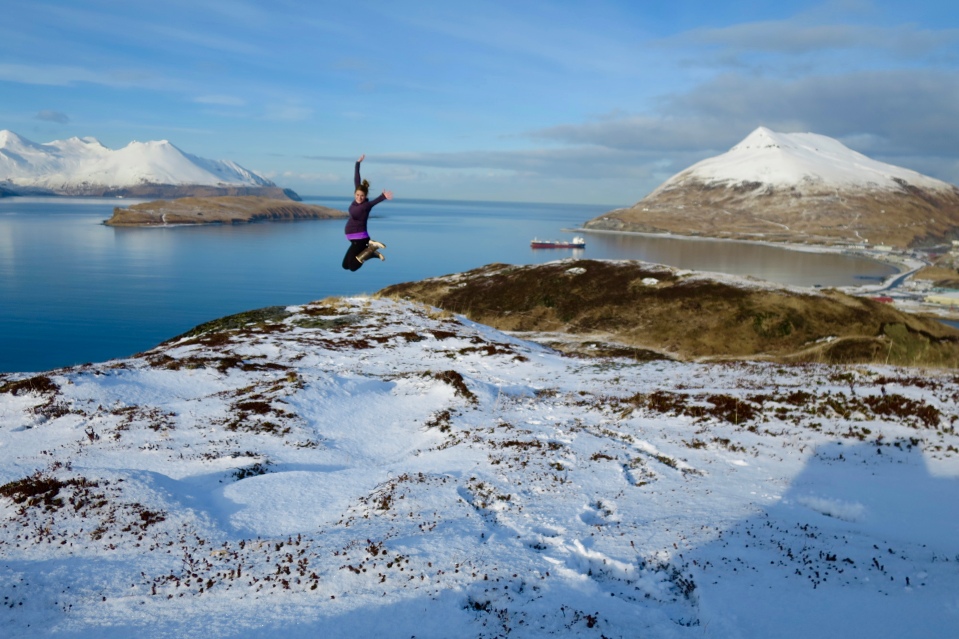 While taking jumping selfies I heard a plane flying low overhead and realized it was the Lifemed plane returning early from their flight, 5 minutes later Woodsen was calling me (what.. I have cell phone reception on bunker hill? Sweet!) to let me know dispatch decided to send another plane so they were back early. I had the truck so I started hoofing it back to the trail and down the hill, Ok now it felt more like a workout, I guess my limited lung capacity had already been a bit taxed after all that jumping. Whew

Lots of fun driving in the LifeMed van with me pregnant and straddling the ladder as a seat. #safetythird

The rest of the night consisted of Woodsen Paragliding off of Ballyhoo (despite my skepticism of how wise this was since he was the only medevac pilot on the island) and sushi. I don’t think Dutch could get much better than this!

A little video of woodsen paragliding 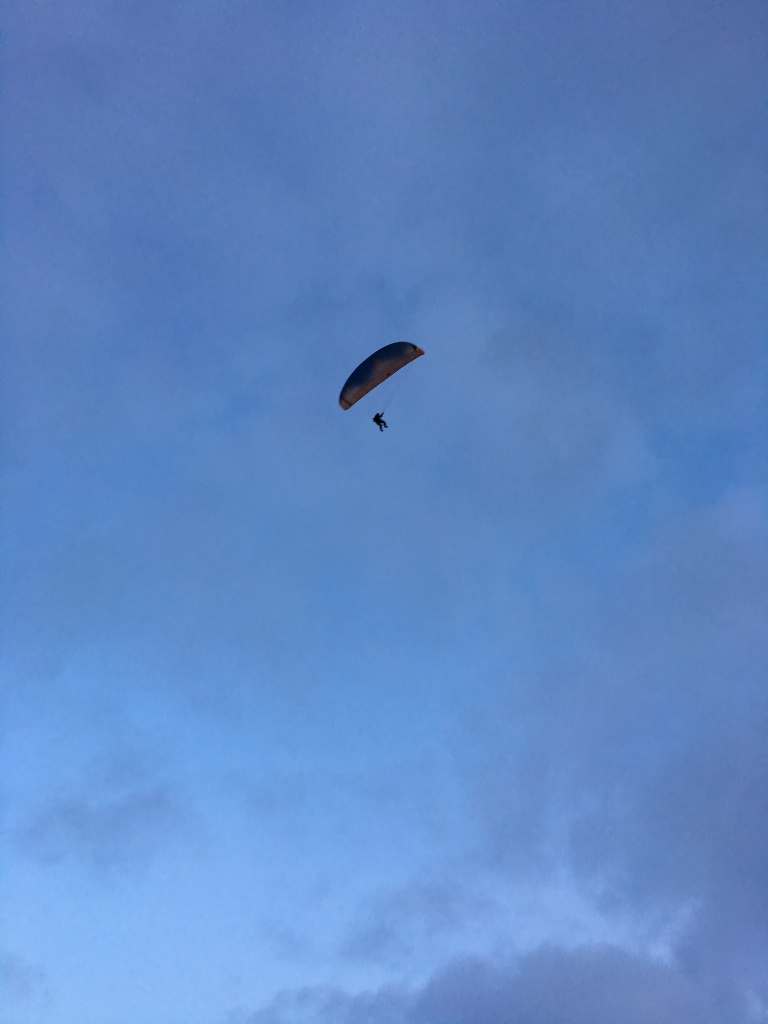 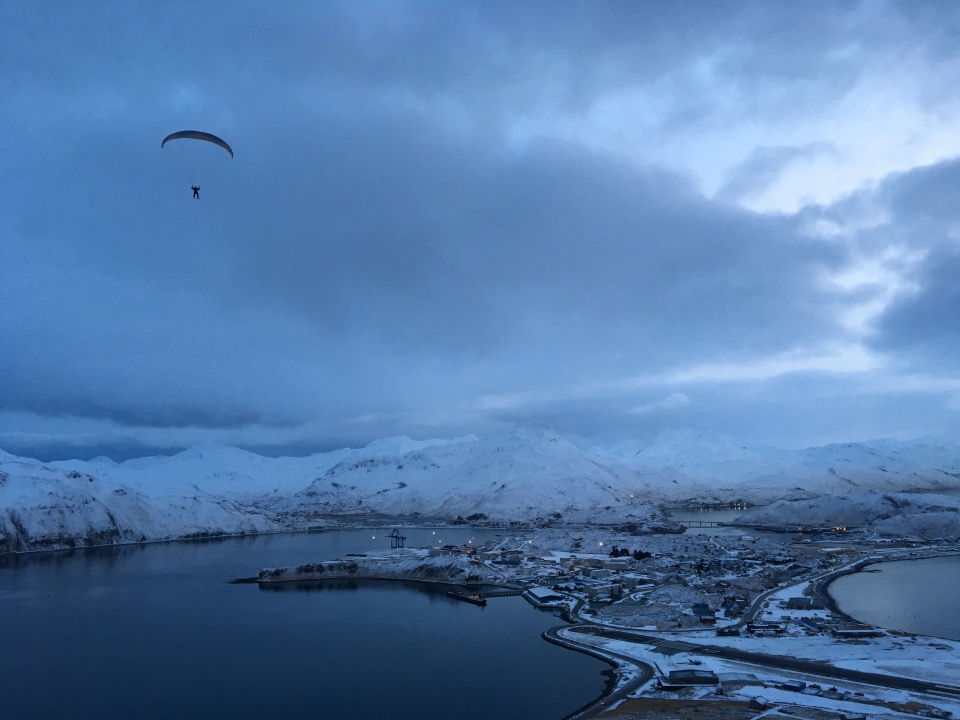 We will be back to visit in the summer for sure!

Make sure to check out…The Museum of the Aleutians  & Taco Tuesday at the Grand Aleutian Hotel. They also have an all you can eat seafood buffet on Wednesday that I didn’t get to check out, but I’ve heard its good!

← Snapshot of the Arrigetch Peaks
Across Alaska – Council to McCarthy →

One thought on “Sun & Fun in Dutch Harbor”