Finishing the Year on the Snowbird Glacier

Well, it’s the last day of 2016, and we know that 2017 is going to be a very different year for our family. In just a few weeks I will switch my work schedule to the opposite of Woodsen’s.  So, instead of having a week off together, we will have just one day off together every week. Woodsen still works on-call, so we will still have plenty of time together; however, getting away from Anchorage will be a lot harder.

We wanted to do something with our last day or so of freedom together, so we set our eyes on the Snowbird Glacier. There’s been a couple of times this year that we’ve planned a trip to the snowbird glacier, but weather, work schedules, or other opportunities presented, and we still hadn’t made it out.

Finally, we made it. I was even more excited that we had this opportinity the night after we came back when I realized that I had put a trip to the Snowbird Hut on my list of goals for 2016.

Checked that one off just in time.

This year, more then in years past, we have really felt the short daylight hours. Trying to time flights around naps and daylight hours has been quite the trick, and it takes a lot more forethought than Woodsen and I are used to.

We got out of the house by 8 and headed to the airport.

Thankfully, Atlee enjoyed the flight this time around.

Honestly, a screaming squirming baby in a supercub really puts me on edge. I’ve had visions of her flailing and pushing the door open and me trying to wrestle her back in and save her from falling out of the airplane. It’s amazing how a mom’s mind can think up all the worst case scenarios and how easy it is to live in a constant state of fear.

I battle my thoughts by keeping a firm grip on one extremity at all times and praying a lot. 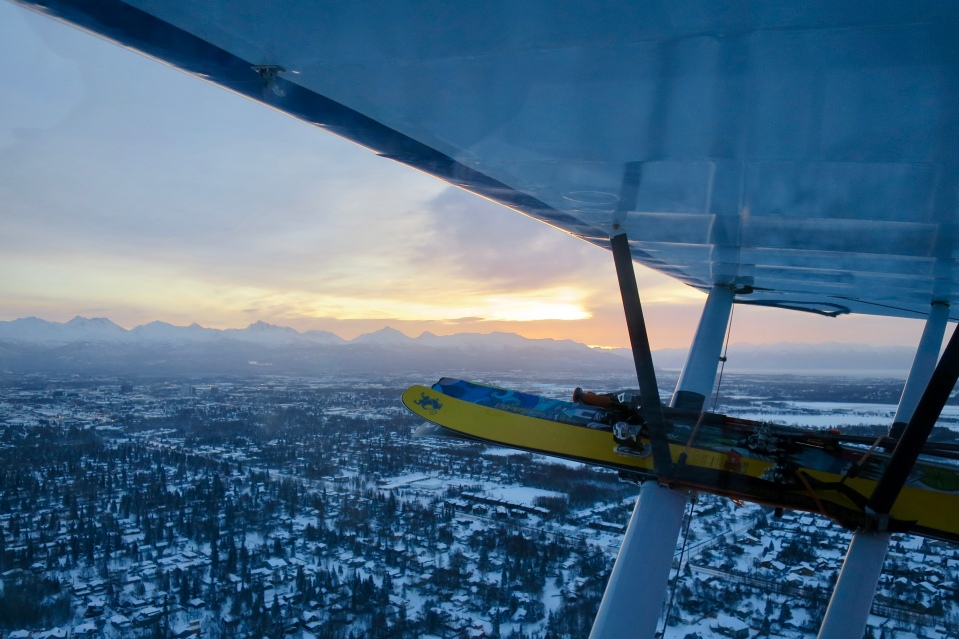 Besides a chance to explore the Snowbird Glacier and hut, this trip also serves a purpose. Our friends Jason & Britta are skiing into the hut and the plan is to meet them there and bring them fuel to heat the hut, as well as some libations to help them celebrate the new year.

Below is a shot looking up the Reed Lakes Trail going up the valley, starting from Archangel Road. 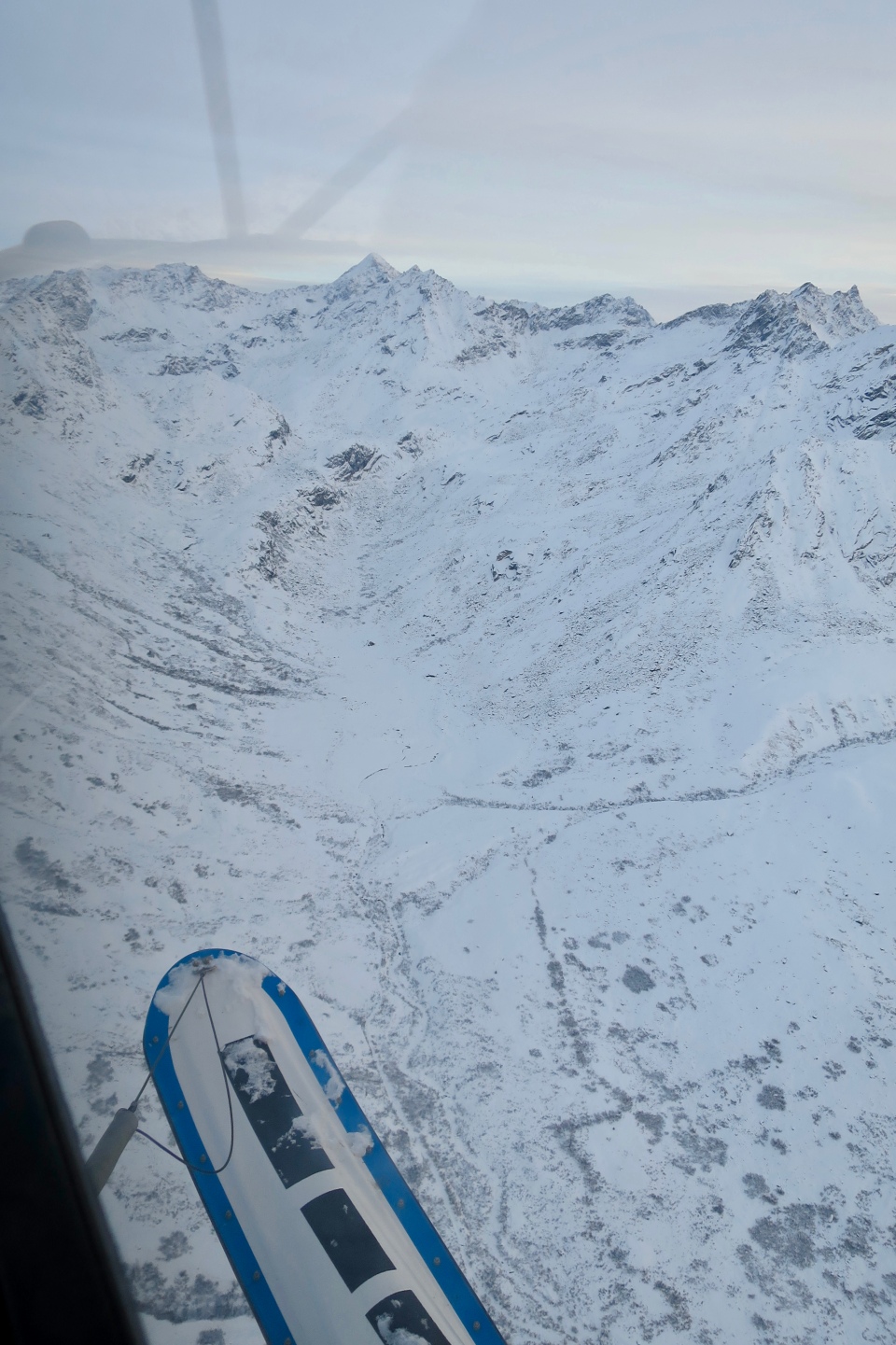 An hour flight from Anchorage lands us on the Snowbird Glacier in Hatcher’s pass.

The snow conditions were horrible, a punchy crust over a thick layer of fluffy snow.

Atlee making the most of the snow.

Woodsen broke trail up to the hut.

Atlee and I enjoyed the cabin and a meal while Woodsen brought in our special delivery.

The views from the hut are hard to capture but spectacular nonetheless.

The hut provides two bunks, both with double beds on the bottom and singles on top, a large loft over the kitchen, and a well-supplied cooking area. 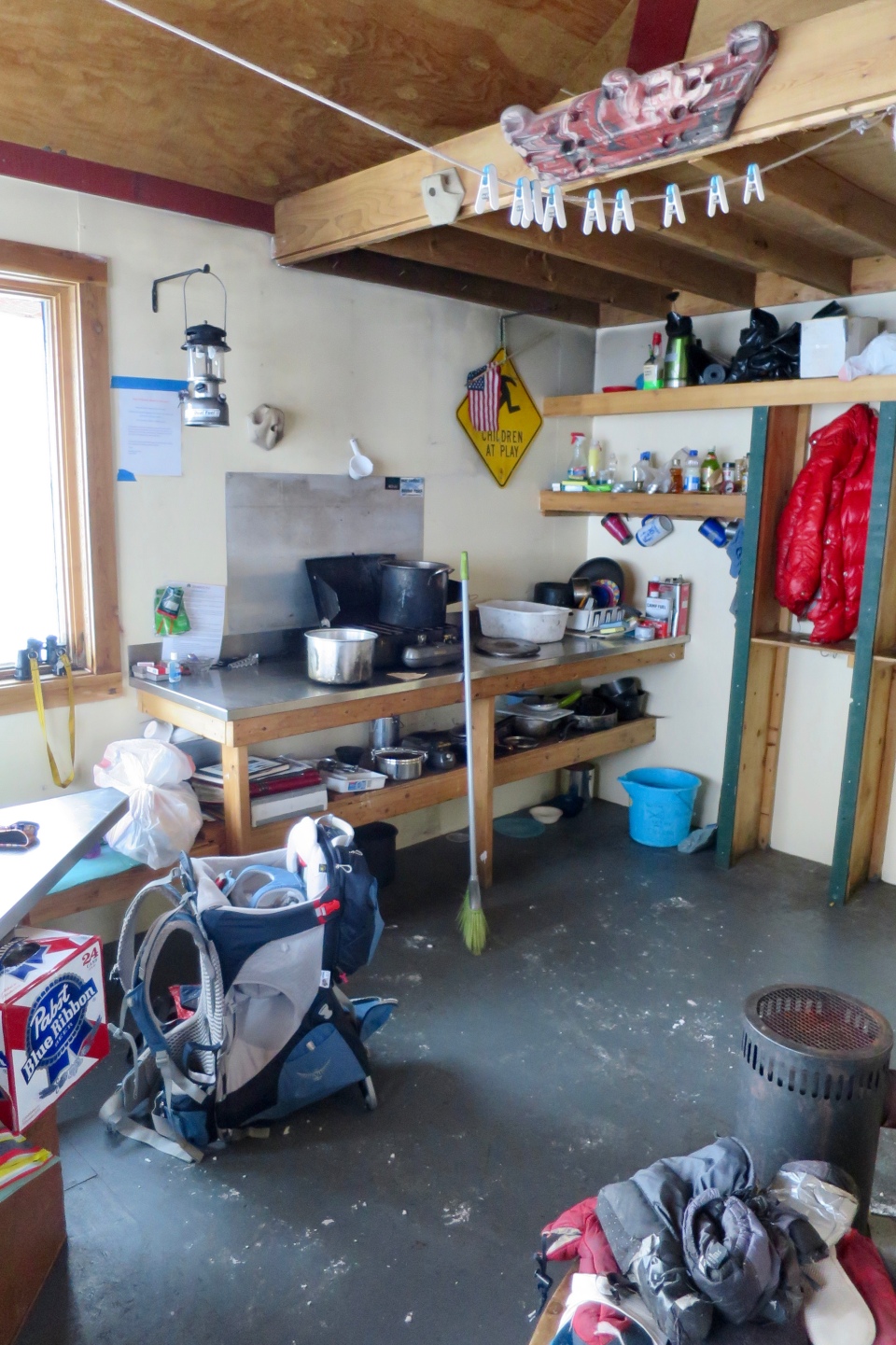 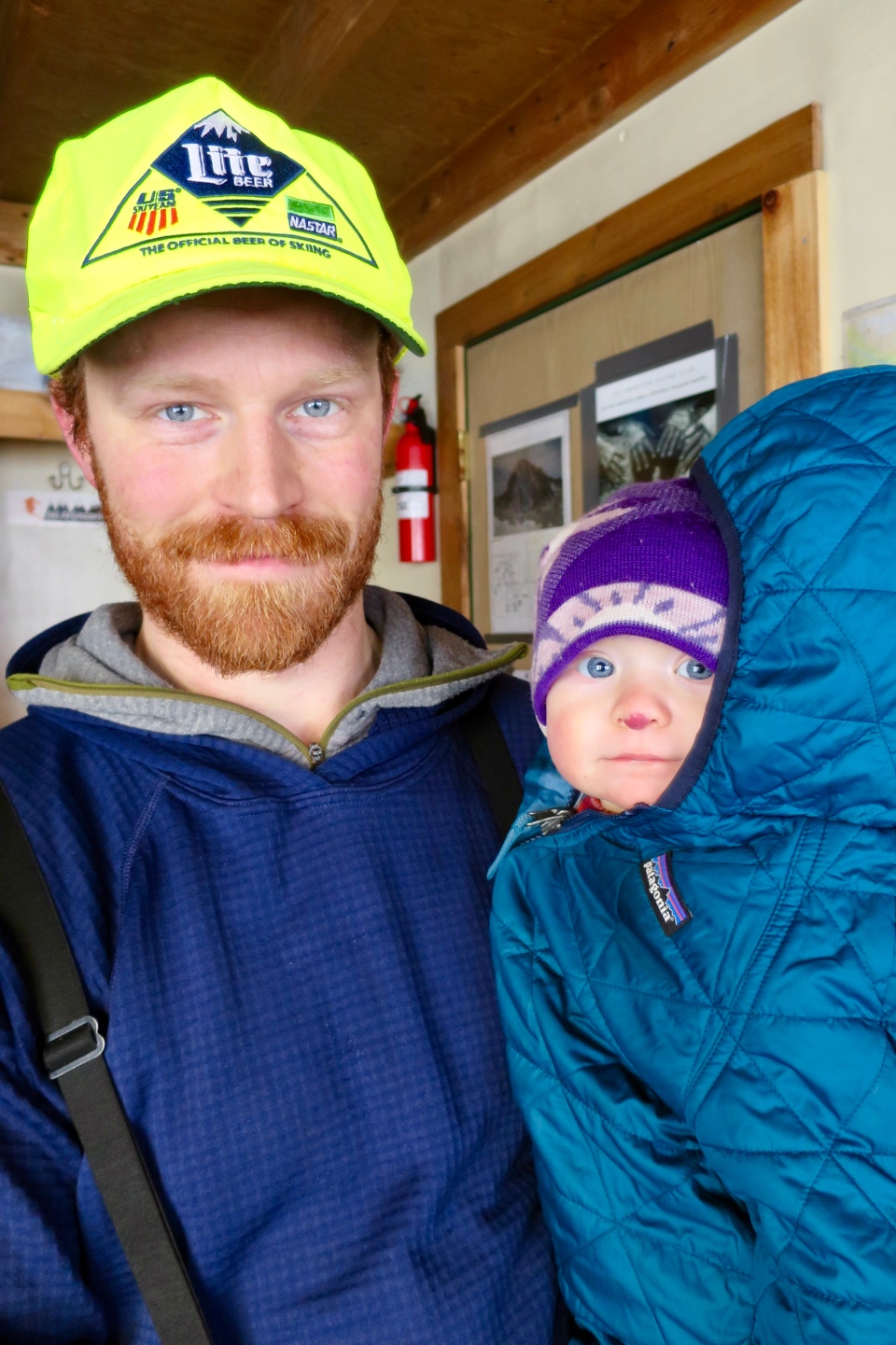 Quite the view from the outhouse looking north.

We didn’t spend long at the cabin or wait to meet our friends. When we had initially landed, the plane sank into the snow.  We unloaded, and Woodsen attempted to make some tracks; but, the plane couldn’t get up any momentum in the deep snow. We knew that we were going to have to do some digging and packing down snow when we got back to the plane, so we headed back to make use of the daylight and make sure we could take off. 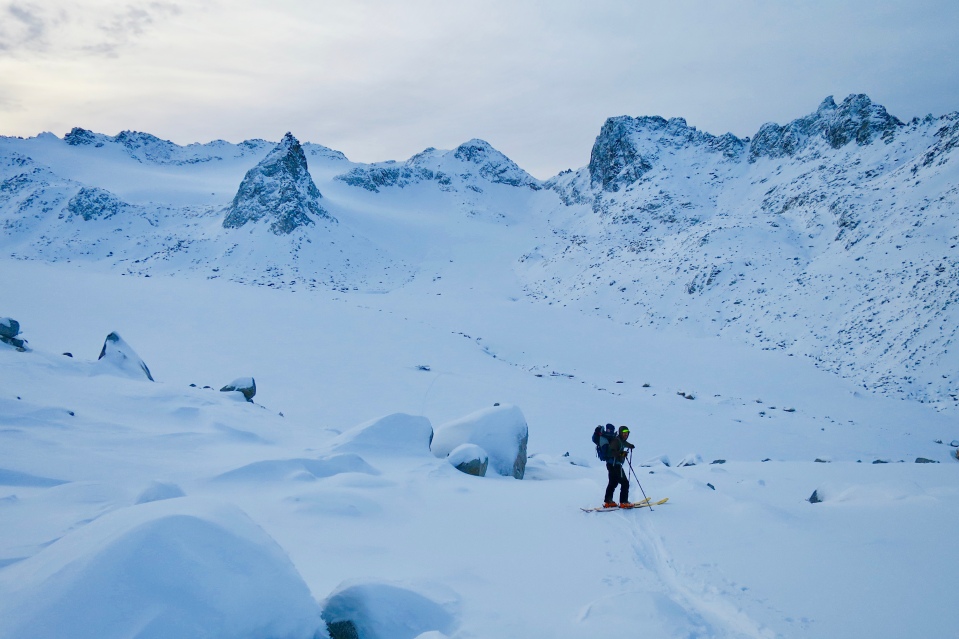 Sometimes traveling in Alaska is stressful, and it’s hard to sit back and enjoy  where you are because you are worried about getting out.

This was one of those days.  While I was thankful we had time and a lot of options, uncertainty is still unsettling.

I took Atlee in the backpack and packed the snow down in front of the plane so it could get on top of the snow and, most importantly, turn around so we could take off down the glacier. Woodsen dug out the skis.

Woodsen got in the plane and was able to get up enough momentum to turn around on the first try.  He circled around and did a couple touch and goes in his tracks to pack a runway down – this time carrying more momentum to overcome the deep snow.

It always amazes me that he can land in his tracks so perfectly.

He parked the plane at the top, pointing it down the glacier, and I skied up to meet him.

Still punching through the snow but thankful the plane is set and ready to go. 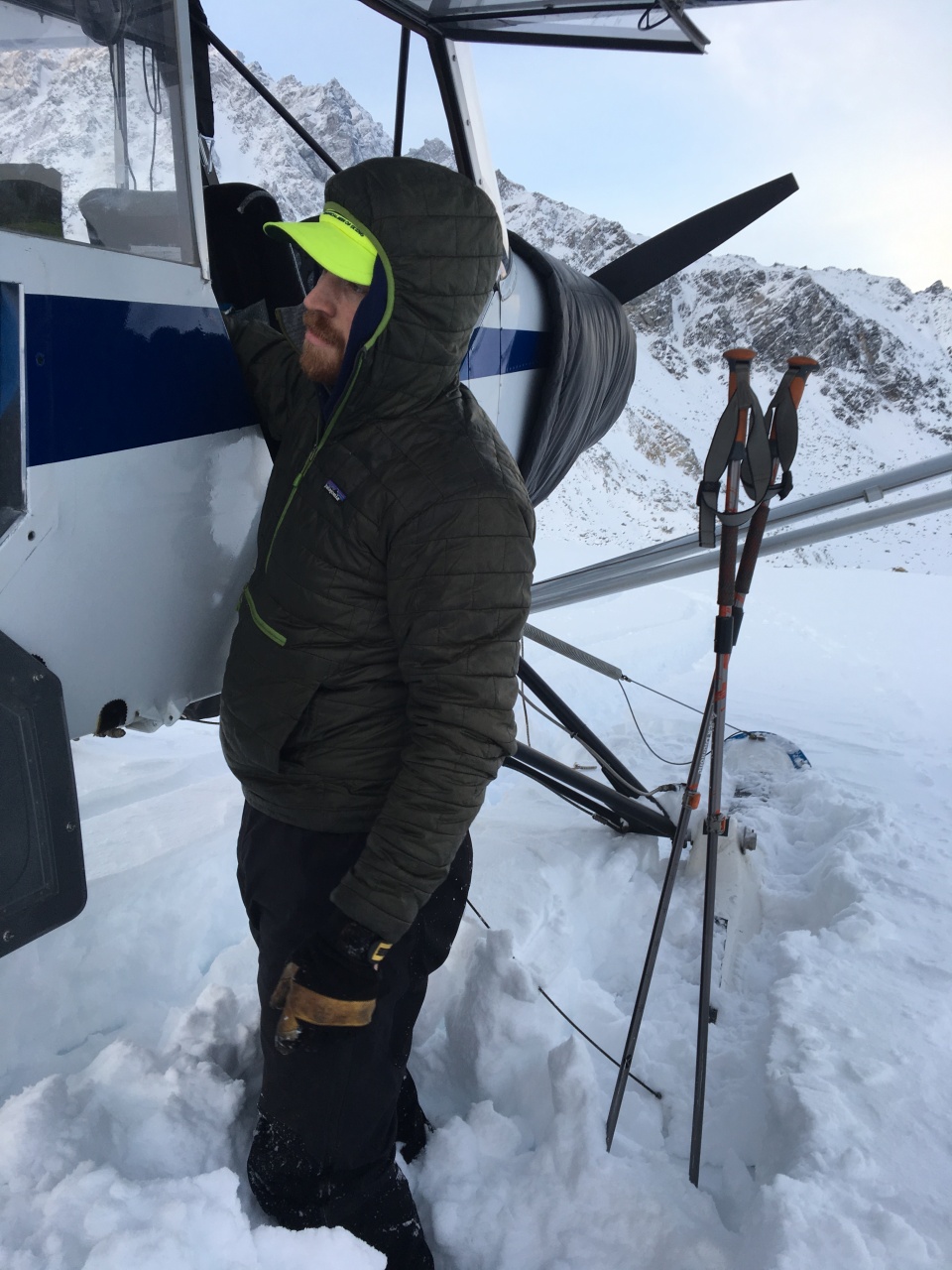 Last feed before heading out. 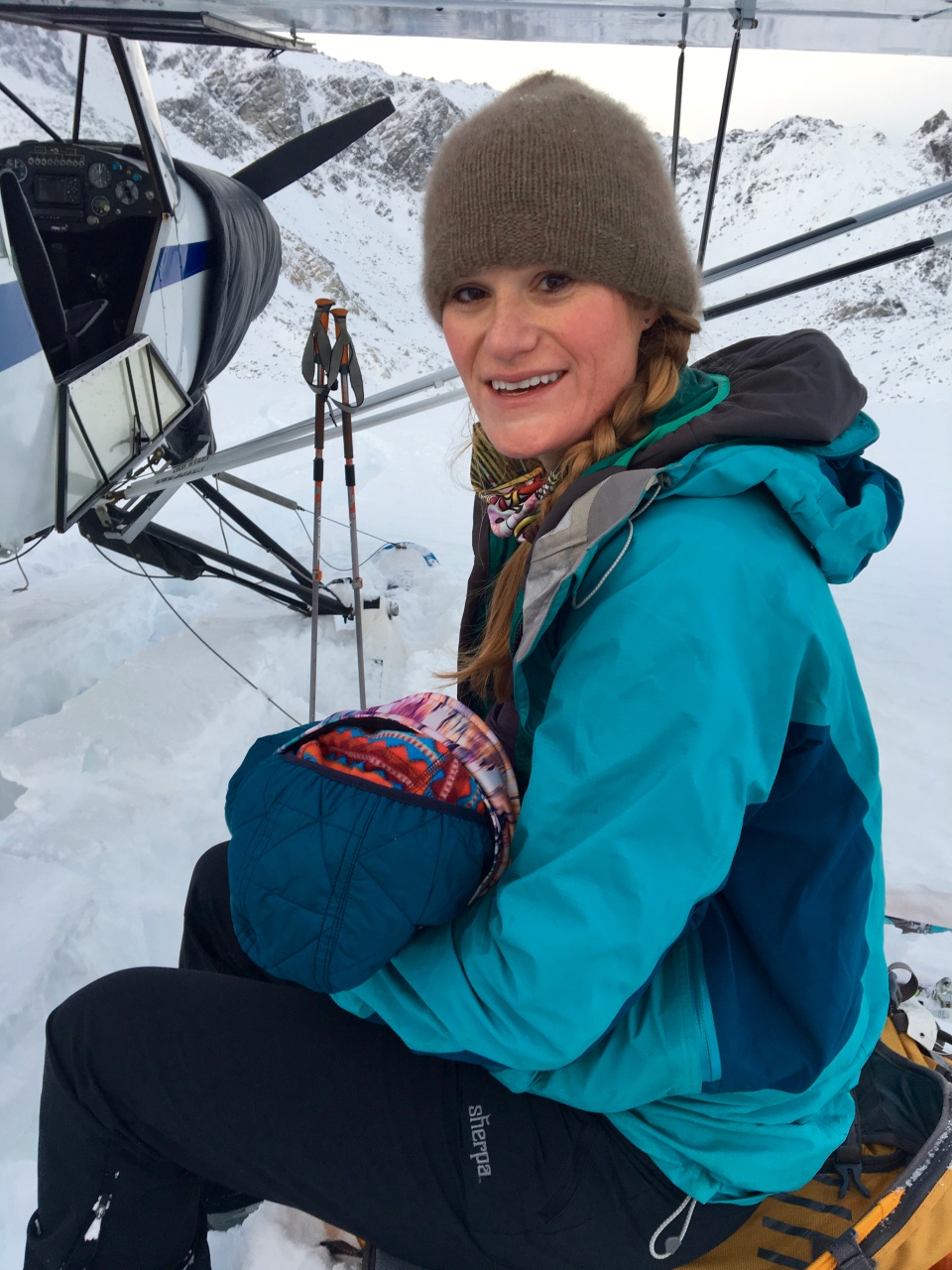 Flying over the beautiful valley to the north of the hut. 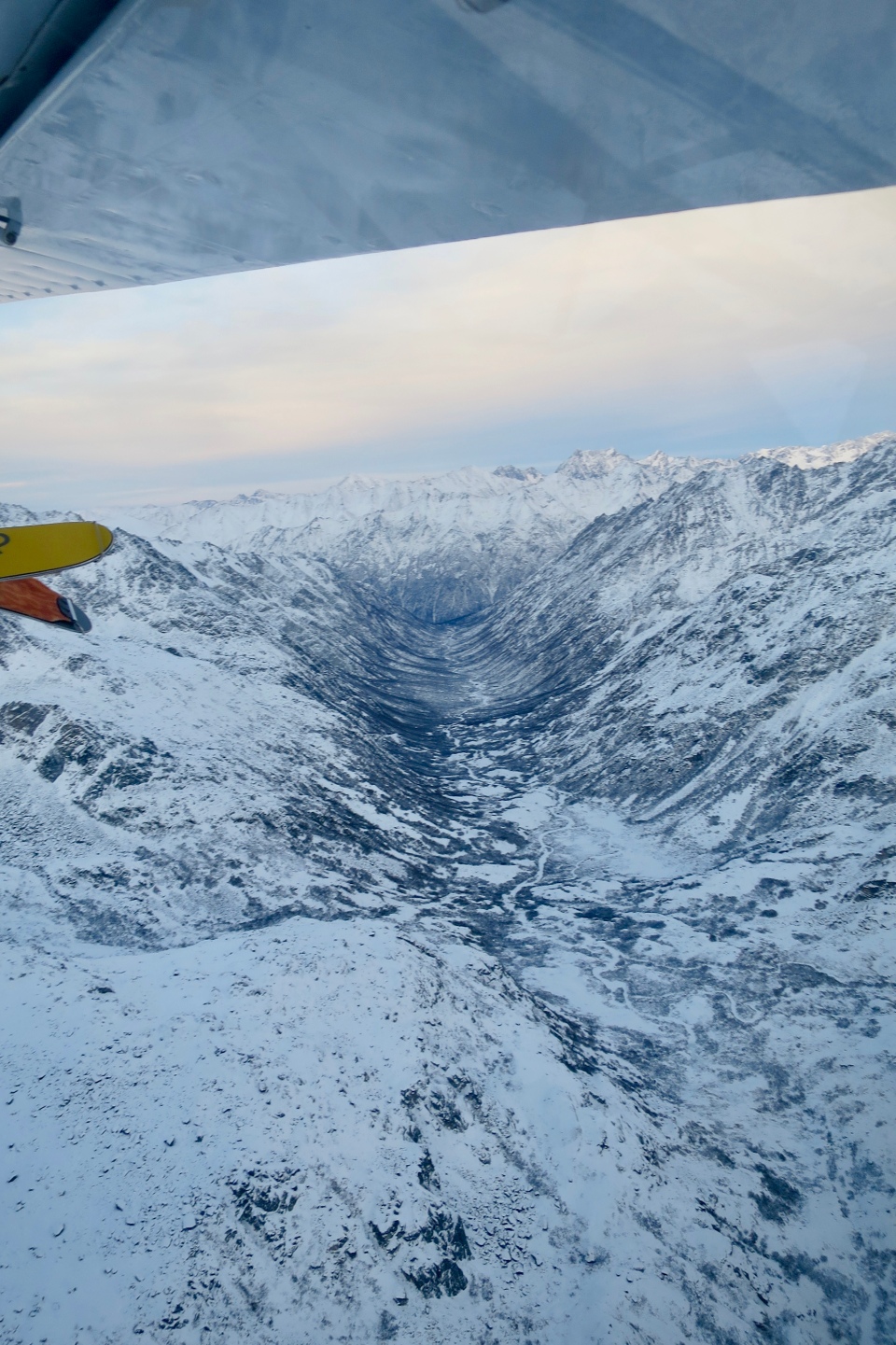 Greeted by the twinkling lights of Anchorage.

Thankful for a safe adventure and for this year that has been completely packed with adventure and joy. Looking forward to the new year and the change of pace that it brings. Each phase on this journey is precious, and while sometimes it seems like we will be missing out or stuck at home, we both realize that it’s what you make of it.  We plan to savor every moment. 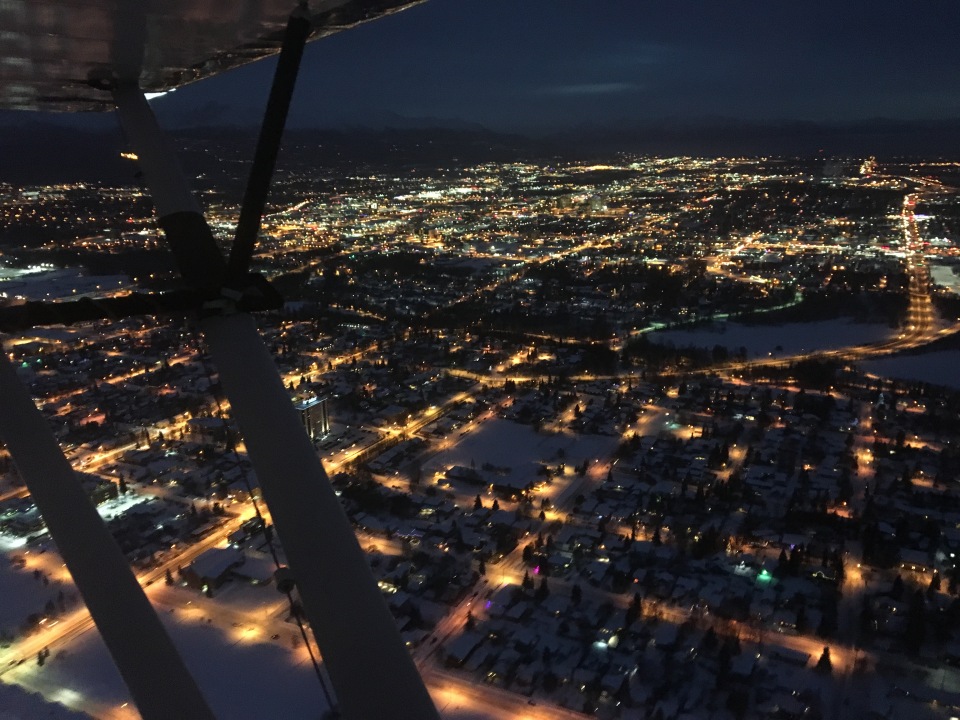